Another week has past and I’ve finally done it… week 9 of 2019 and I’ve crafted everyday!

I’ve had a week at home with no work travel and despite a pretty crazy week I’ve made sure I found at least 30 minutes each day for a little crafting. Let’s see if I can carry it on for another week…

By knitting or crocheting a little each day I’ve made some great progress this week! It just goes to show that when you put some time aside you can get a lot done!

The front is done… I set myself a target to finish the front of the cushion this week and I cast him off on Friday. I’m pleased with how he’s turned out, however I’m not sure what’s happened with my tension as he’s taller than he is wider.

I’ve always been a knitter who knits “just right” I’m neither too loose (creating bigger sized projects) nor too tight (creating smaller sized projects). Having worked on fairisle pieces in the past my tension has been exact so I can only put this down to the combination of fairisle and intarsia techniques being used together. Ultimately Oswald is a cushion so it won’t matter that the finished size is bigger than the pattern says (unlike a jumper where incorrect tension can result in the finished object being too big or small to wear!) but I will need to bear the size difference in mind when it comes to creating the back piece, as that will need to be slightly longer to ensure it matches. I also need to think about the filling nas the project was meant to be 46x46cm but now I’ll need to find a cushion centre that takes a 52cm cover – I might stuff it with filling rather than an actual cushion but more on that in future weeks!

Of course blocking will help to even it all out and hopefully I’ll find time to pin him out this week. 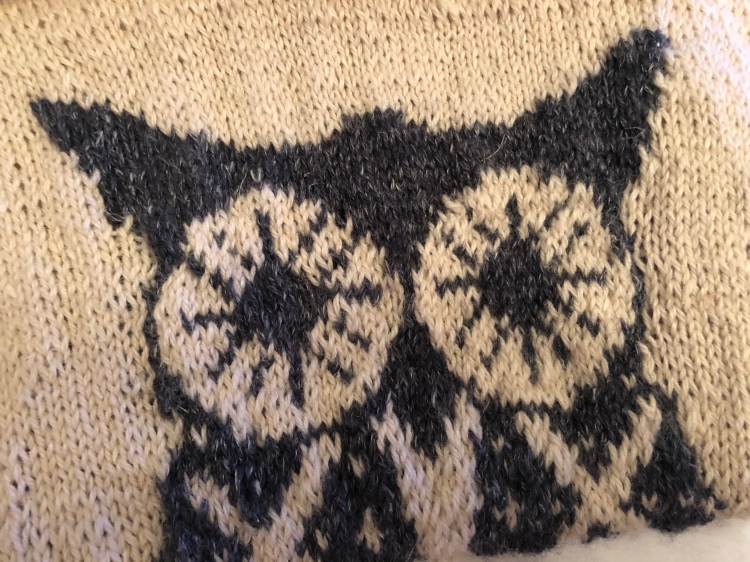 It feels great to have a project finished that I can actually talk about, rather than just update you on my weekly progress.

The other project I’ve worked on this week has been to continue with Geraldine. With Oswald reaching a critical conclusion early in the week I took Geraldine to my weekly knit/crochet club as well as working on her for a little train crochet to and from London as I had a weekend away.

All the crochet is finished now, she just needs to be sewn up to bring her to life and Geraldine will join my menagerie in time for next week’s blog.

Until next time… happy crafting!